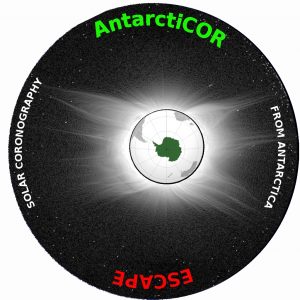 ESCAPE is a solar coronagraphy experiment from the italian/french station Concordia in Antarctica at Dome C (coordinates: 75° 06’S; 123° 20’E ; altitude: 3233 m a.s.l.). The experiment is based on an internally occulted coronagraph, AntarctiCor, based on the optical design of the ASPIICS space telescope, on-board the ESA PROBA-3 mission. The technological goals are: the validation of the ASPIICS optical design and the scientific use of cameras with micropolarizer array. The sceintific objectives of the mission include the characterization of Dome C site as one of the few sites on the Earth for solar coronagraphy and measurements of the solar corona in polarized light.

The project is coordinated and developed by the INAF-OATo team with the collaboration of the french Laboratoire Atmosphères, Observations Spatiales (LATMOS) and the astronomical observatory of the autonomous region of the Valle d’Aosta (OAVdA).

The project started in 2016. The INAF-OATo team partecipated to two antarctica campaigns in 2018/2019 and 2019/2020 (XXXIV and XXXV italian expedition to Antarctica). A third measurement campaign is expected to be done.