The companion of the giant star CW Leonis unveiled

The companion of the giant star CW Leonis unveiled

Astronomers from the Italian National Institute of Astrophysics (INAF) in Turin, Italy, have discovered direct evidence of an unseen companion to the relatively nearby red giant star CW Leonis (also known as IRC + 10216). Being a red giant, CW Leonis has a radius that extends out to a distance equivalent to the orbit of Mars, some 500 times the radius of our Sun, or 350 million kilometres. CW Leonis is also the closest ‘carbon star’ to our Solar System, a rare type of star with an atmosphere that is unusually rich in carbon. A team of researchers, led by Alessandro Sozzetti, have directly measured for the first time the motion of CW Leonis due to the gravitational perturbation of a smaller unseen companion orbiting around it. The discovery was made thanks to position measurements obtained with the 1.05m astrometric telescope REOSC of the INAF Astrophysical Observatory in Turin.

“CW Leonis is a spectacular laboratory to study the latest stages of stellar evolution,” says Sozzetti. “It is in fact the brightest object in the sky outside the Solar system if observed at a near infrared wavelength of 5 microns. At 12 microns only the Galactic Center and the star forming region of Eta Carinae are brighter. In its evolution through the red giant phase, CW Leonis began to pulsate, losing mass from very strong solar winds that have created a large surrounding envelope of gas and dust, extending for thousands of astronomical units, and in which dozens of different molecules, including water, have been found.
” The complicated structure of this surrounding envelope has been interpreted as circumstantial evidence that CW Leonis is hosting a fainter celestial companion, an idea that has been recently corroborated with data of the ALMA millimeter / submillimeter telescope in Chile showing details in the structure of the gas and dust envelope that could be explained by the orbital motion of CW Leonis: the star sweeps the material that crosses its path because of the gravitational thrust of its invisible companion. The work of the INAF team, using data taken over a period of more than 6 years, brings to an end decades of debate by presenting, for the first time, direct evidence of the orbital motion of CW Leonis. This orbital motion is seen as deviations from its smooth motion across the celestial sphere. The analysis by the INAF team has also allowed for the first direct measurement of the distance to CW Leonis, estimated between 260 and 360 light years.

The INAF team’s work also revealed, and took account for, a subtle effect caused by the changing brightness of CW Leonis itself, which pulses with a known period of about 1.8 years. This particular effect, called variability-induced motion (VIM) in astrometry, is an apparent displacement of the position of an unresolved binary caused by the changing brightness of one of the two stars, leading to a correlation between the brightness of CW Leonis and its measured position. Taking into account this effect led to a more robust and improved measure of its distance.
“The final result is that our analysis allows us to put new important constraints on the nature of CW Leonis’ unseen companion in terms of mass, separation, and orbital period, obtaining a good qualitative agreement with recent ALMA data,” Sozzetti emphasizes. “CW Leonis’ companion is probably a star somewhat smaller than our Sun, orbiting it with a period of just over 100 years. We still have sources of uncertainty because of the limited coverage of its orbit, our lack of knowledge of a precise mass of CW Leonis, and the limited accuracy with which the REOSC data allows us to measure the distance of CW Leonis. ”
In the near future better characterization of the companion’s orbit and mass (for example, combining REOSC data with Gaia data) will be of crucial importance for understanding the future phases of the evolution of CW Leonis and stars like it, in particular the different morphology of so-called planetary nebulae (a result of the violent expulsion of a star’s outer layers at the end of the red giant phase) that depend on whether the central star is single or has a companion. “It’s a great achievement with a 1-meter telescope from Earth, in the era of large telescopes and space missions!” commented Professor Richard Smart one of the co-authors at the University of Hertfordshire.

Images of the REOSC telecope used to observe CW Leonis. 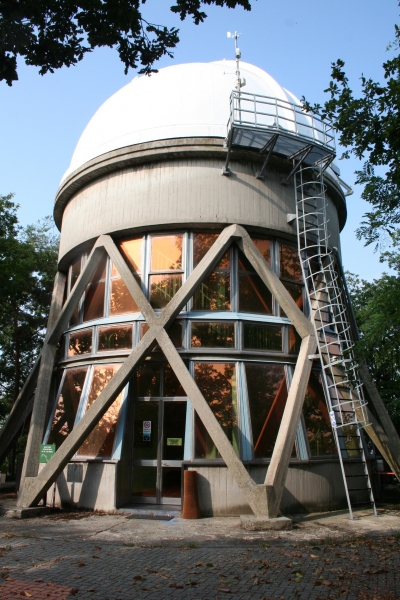 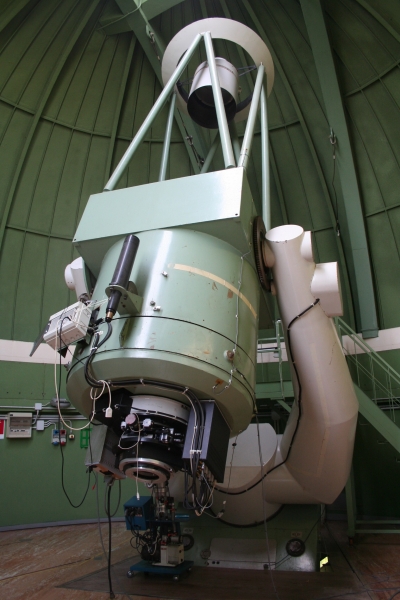 The paper titled “Evidence for orbital motion of CW Leonis from ground-based astrometry” authored by A. Sozzetti, R.L. Smart, R. Drimmel, P. Giacobbe and M.G. Lattanzi has been accepted for publication in Monthly Notices of the Royal Astronomical Society. The paper is available at
https://arxiv.org/abs/1706.04391
https://academic.oup.com/mnrasl/article/doi/10.1093/mnrasl/slx082/3860091/Evidence-for-orbital-motion-of-CW-Leonis-from

About the National Institute for Astrophysics (INAF):
The National Institute for Astrophysics (Italian: Istituto Nazionale di Astrofisica) is the principle Italian national institute dedicated to scientific research in astronomy and astrophysics, composed of over 1400 personnel based in 19 local research institutes spread throughout Italy. Research performed by the scientific staff of the Institute ranges from the study of the planets and minor bodies of the Solar system up to the large-scale structure of the Universe and groups and clusters of galaxies on cosmological scales. For more information go to https://www.inaf.it/en?set_language=en