Polarimetric observations carried out at Very Large Telescope VT1 of the European Southern Observatory between December 25, 2019 and March 20, 2020, suggest that the small body 2I/Borisov, the second and most recently detected interstellar visitor to our Solar System, is probably the most unaltered cometary object ever observed, and most likely it never passed close to a star. For this reason, its surface is believed to be pristine, having survived unaltered since the epoch of its formation.

2I/Borisov was discovered by the amateur astronomer Gennady Borisov, in August 2019. It was subsequently found to move along a trajectory coming directly from the interstellar space. This is only the second example of a small interstellar body crossing our solar system, after the case of the asteroidal body 1I/’Oumuamua, discovered in 2017. In the case of 2I/Borisov, however, the presence of a cometary coma was evident in the images, making it the first interstellar cometary object ever seen. For this reason, many observers have studied 2I/Borisov while it was visible, In order to find evidence of similarities or differences with respect to comets of our Solar system, possibly due to possible differences in the astrophysical environment from which this object took its origin.

An international team, led by Stefano Bagnulo, from Armagh observatory, Northern Ireland, which included also Alberto Cellino, from INAF – Astrophysical Observatory of Torino, performed polarimetric observations of 2I/Borisov. The authors used the FORS2 instrument on ESO’s VLT to study 2I/Borisov in detail using a technique called polarimetry, which is used to study comets and other small bodies of our Solar System. This allowed them to compare the interstellar visitor with our local comets.

The results have provided important information on the physical properties of this body. In particular, the sunlight scattered by the cometary coma exhibited an unusually strong linear polarisation and a steep increase depending upon the illumination conditions as seen from Earth. Moreover, the measured linear polarisation was noticeably constant throughout the coma, and its dependence upon wavelength was similar to that of low-albedo (intrinsically dark) small bodies of our solar system. The polarimetric behaviour of a comet is determined by the properties of the dust present in the coma. In the case of 2I/Borisov the data indicate that the dust particles were very homogeneous in size and unusually small with respect to the vast majority of Solar system comets.

The only one comet known to exhibit a very similar polarimetric behaviour is the famous Hale-Bopp comet, which was very bright and was seen by millions of people in the late 1990s. Hale-Bopp has been one of the best-studied comets using techniques of remote observations. In particular, the properties of this comet were found to be pristine, having probably experienced one passage, only, in the inner Solar system, since the epoch of its formation.

In the case of 2I/Borisov, the measured polarisation and colour properties strongly indicate that this body is even more pristine than Hale–Bopp. This means it carries signatures of the cloud of gas and dust from which it took its origin.

Alberto Cellino would like to stress that 2I/Borisov could represent the first truly pristine comet ever observed and the fact that 2I/Borisov and Hale-Bopp are remarkably similar suggests that the environment in which the former originated is not so different in composition from the astrophysical  environment in the early Solar System.

The team believes that the comet has never passed close to any star before it flew-by the Sun in 2019.

This research is presented in the paper “Unusual polarimetric properties for interstellar comet 2I/Borisov” published on March 30, 2021 in  Nature Communications. 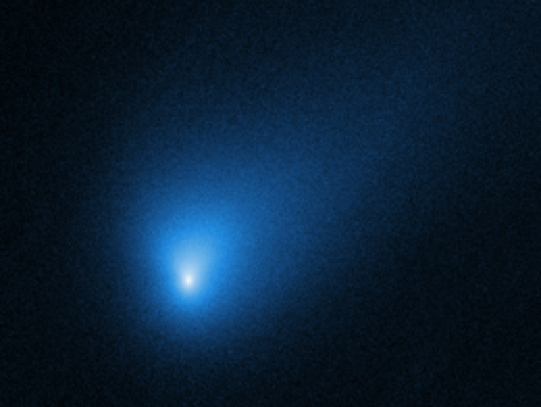 Figure: An image of the 2I/Borisov comet obtained with the HST on October 16, 2019. [courtesy: NASA and the Space Telescope Science Institute (STScI)].