A wealth of science results from ESA Solar Orbiter’s cruise-phase observations have been published a few days ago in more than fifty papers comprising a special issue of Astronomy and Astrophysics.

Solar Orbiter’s cruise phase began on 15 June 2020, and lasted until 27 November 2021. During that time, the spacecraft acquired scientific data with its in-situ instruments, which are designed to measure the environment around the spacecraft. It also used its remote sensing equipment to look at the Sun in order to characterise and calibrate those instruments. Some of these data turned out to be of such good quality that they enabled the first scientific studies to be undertaken ahead of the main science phase, which began in late November 2021.

Among the papers in the special issue, three feature the first results obtained by Metis, the coronagraph developed by the Italian Space Agency (ASI) in collaboration with the National Institute of Astrophysics (INAF), the National Research Council (CNR), and several Italian universities and research Institutes around the world.

Two of these works exploit the innovative ability of Metis to observe in the ultraviolet, a novelty compared to the standard measurements of existing coronagraphs.

The paper on the “first light” of the instrument, i.e. on its very first images, provides a first example on the science that the new observations obtained with Metis will enable. Use of simultaneous observations in the visible and ultraviolet bands will allow us to directly estimate the expansion speed of the solar wind in the regions where it is accelerated.

Another article describes the first coronal mass ejection (or CME, as commonly expressed by solar physicists) observed by Metis, showing for the first time images obtained in the ultraviolet from the radiation emitted by neutral hydrogen involved in the eruption, and studying its evolution over time.

In a third article of the special issue of Astronomy & Astrophysics, researchers demonstrate how the analysis of the traces of cosmic rays in the images of the instrument can be used to monitor the trend of this very important flow of particles over time. 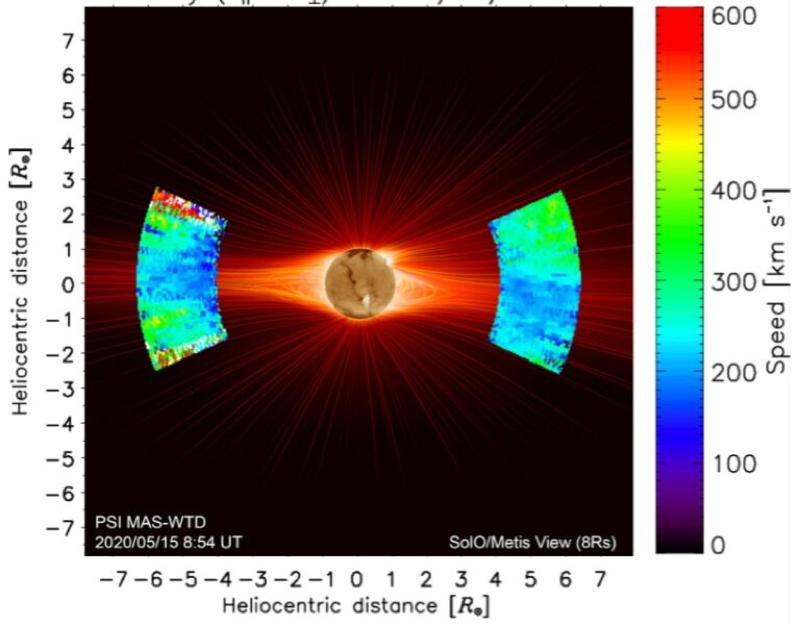 First map of the solar wind speed obtained from Metis “first light” images. The map shows the first derivation of the expansion of the neutral-hydrogen component of the solar wind at large altitudes around the equatorial regions of the Sun.
[Credits: Romoli et al. 2021]