The Gaia Catalogue of Nearby Stars: a census of stars in the Solar neighbourhood

Home/NEWS/NEWS SCIENTIFICHE/The Gaia Catalogue of Nearby Stars: a census of stars in the Solar neighbourhood

The Gaia Catalogue of Nearby Stars: a census of stars in the Solar neighbourhood

A team of European Astronomers led by Richard Smart of the Osservatorio Astrofisico di Torino has made the most complete census to date of 331,312 stars within 100 pc (326 light years) of the Sun. This is possible with the early third data release of the Gaia mission and is more complete, covers a larger volume of space, and is far more homogeneous than any catalogue of nearby stars published before.

Even though compared to the full Milky Way, the Gaia Catalogue of Nearby Stars (GCNS) bubble of 100 pc is tiny, it is populated by objects from all parts of the galaxy and has lead to studies of galaxy kinematics, white dwarfs, the scale height of the thin disk, the stellar binarity function and other astronomical questions. An important example is the luminosity function or the distribution found when binning the stars in the Gaia Catalogue of Nearby Stars in absolute magnitude. This distribution has the imprint of the local star formation rate, the evolution of the Galaxy and shows clearly the boundary between stars and substellar objects. Substellar objects – sometimes called brown dwarfs – are objects that are below the hydrogen-burning limit and hence cannot become a star. They are extremely important for the study of the formation of small objects, including planets.

To interactively explore this catalog try the GCNSFly app 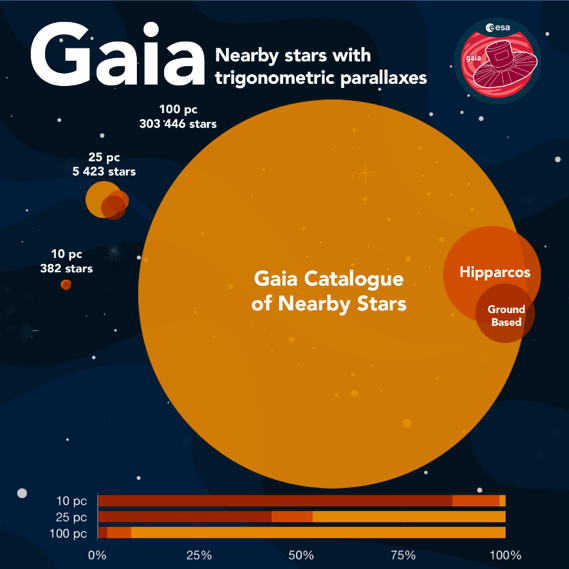 Figure: The Gaia Catalogue of Nearby Stars (GCNS) compared to previous compilations. Represented is the number of nearby stars with trigonometric parallaxes within 10 pc, 25 pc and 100 pc. The colours are representative for the catalogue (dark brown for ground-based observatories, medium brown for the ESA Hipparcos catalogue, and light brown for the Gaia GCNS). The area of the circles is proportional to the number of stars. The circles overlap when the stars appear in both or in all three catalogues. Gaia has completed the census by a factor of about 2 within 25 pc and 10 within 100 pc. An examination of the 10 pc sample finds that GCNS provide the first direct parallax of five stars in multiple systems. Image credit: S. Anderson, C. Reylé, ESA/Gaia/DPAC