The first scientific results of the Metis coronograph

The first scientific results of the Metis coronograph

The first article analyzes the images of the extended solar corona obtained for the first time simultane-ously in polarized visible light (580-640 nm) and in the ultraviolet (Lyman-α line of neutral hydrogen at 121.6 nm) by the Metis coronagraph on 15 May 2020.
The analysis exploits the Doppler-dimming technique, which allows the measurement of the solar wind speed on the plane of the sky based on the attenuation of the intensity of the Lyman-α line with respect to the intensity expected for a static corona (without wind), starting from the physical parame-ters of the solar corona including the electron density of the plasma derived from the polarized-brightness images.
In this way, the first “instantaneous shot” of the speed of the wind that is accelerated in the solar coro-na was obtained. Thanks to these observations it was possible to identify the regions of the solar co-rona where the so-called “slow” solar wind, i.e. with speeds measured near the Earth between ~ 300-400 km/s, originates.
The high resolution global maps of the solar wind velocity in the corona show a denser layer ~ 20° wide, centered on a quiet equatorial streamer, a structure extending in corona above the eastern limb of the solar disk, where the wind speed is about 160 km/s in a distance from the center of the Sun rang-ing from 4 to 6 solar radii. In the regions adjacent to the higher density layer, the wind speed increases rapidly, marking the transition between slow and fast wind in the corona.

The second article presents a study of the traces of cosmic rays of galactic origin revealed in the first visible-light images obtained by Metis during the commissioning phase of Solar Orbiter this spring. The comparison of the traces observed in the visible-light images of Metis with the results of Monte-Carlo simulations of the interaction of cosmic rays with the visible-light detector allowed us to estab-lish that cosmic rays affect only a small fraction (1 in 10,000) of the detector pixels. A similar study will be conducted during the mission to carry out instrumental diagnostics and verify whether the Metis data, together with the Monte-Carlo simulations, allow long-term monitoring of the proton flux of galactic origin. 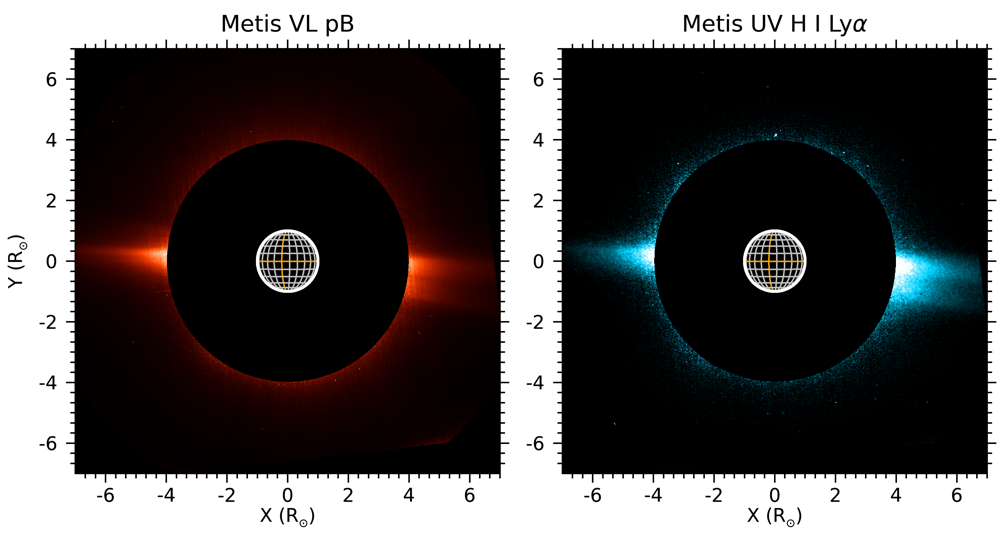 Metis images in polarized visible light (left) and in the UV Lyman-α line (right) of the solar corona observed from a distance of 0.64 AU (Astronomical Units) from the Sun on May 15, 2020.