Chemical cartography of the Milky Way

Chemical cartography of the Milky Way

The chemo-kinematical properties of the stellar populations of the Milky Way contain the imprints of formation processes of our Galaxy. Now, we have produced and analysed the largest chemical map of the Galaxy based on the astrophysical parameters provided by Gaia DR3 for 5,591,594 stars and individual chemical abundances for up to 12 elements measured for 2,513,593 stars. This study has been performed by an international team coordinated by Alejandra Recio-Blanco of ththe Observatoire de la Côte d’Azur.
The researchers A. Spagna, P. Re Fiorentin, E. Poggio, and M.G. Lattanzi of the Turin Astrophysical Observatory have been involved in this project and responsible for the analysis of the correlations between the chemical and kinematic properties. One of the most interesting results is the observed kinematic disturbances of the disc —seen as a spiral in the phase space of Z versus Vz — that appears to be linked to the metallicity [M/H] variations (see Figure).

See the pre-print of the article: Gaia Data Release 3: Chemical cartography of the Milky Way, by Gaia Collaboration, A. Recio-Blanco, et al.  on arXiv 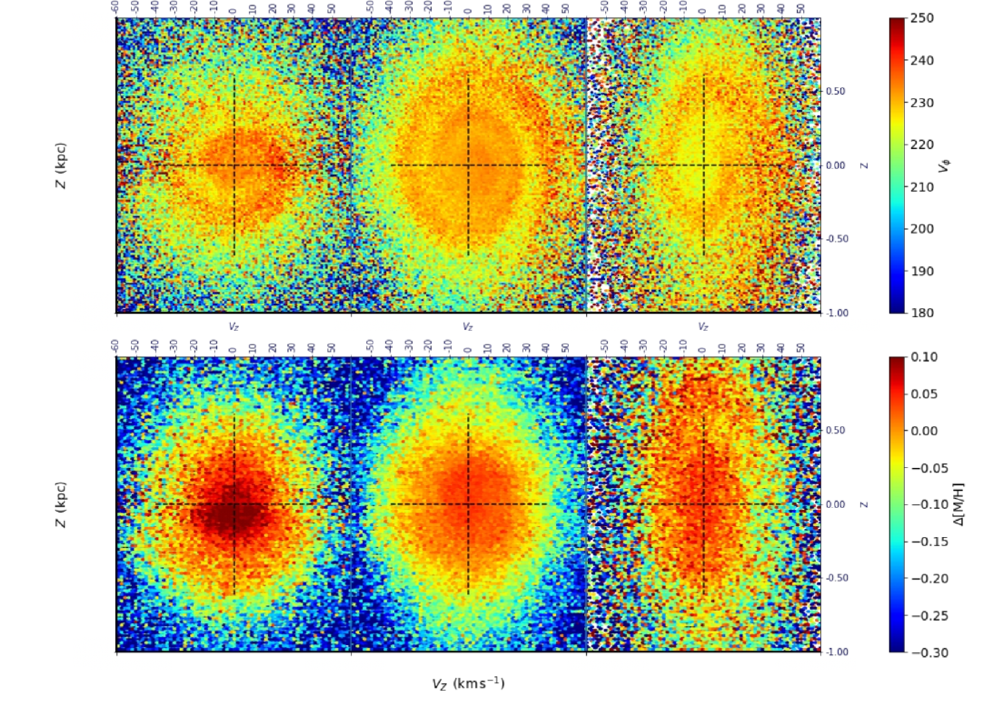 Figure. Galactic map of the velocity distribution Vz vs. Z for 5.25 < R < 11.25 kpc. From left to right, the radial range is shown in three rings at R = 6.25, 8.25, and 10.25 kpc, each of 2 kpc in width. Stellar distribution coloured as a function of the rotation velocity Vphi  (top panels) and the metallicity residual D[M/H] with respect to the mean local value. (Credits: A. Recio-Blanco et al.)