A rare eclipsing binary system consisting of a hot subdwarf and an M dwarf discovered in the data of the Kepler space telescope.

Home/NEWS/NEWS SCIENTIFICHE/A rare eclipsing binary system consisting of a hot subdwarf and an M dwarf discovered in the data of the Kepler space telescope.

A rare eclipsing binary system consisting of a hot subdwarf and an M dwarf discovered in the data of the Kepler space telescope. 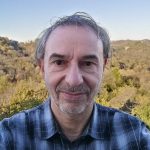 EPIC 216747137 is the name of the new eclipsing binary discovered in the Kepler data and studied in great detail by an international team coordinated by Roberto Silvotti, researcher at the Astrophysical Observatory of Turin.
The interest in eclipsing binaries is related to the possibility of determining not only the orbital parameters of the system, but also the masses of the two stars.
In the case of EPIC 216747137, the two components of the system are a hot  subdwarf, that is a blue evolved star that has lost almost all its envelope near the end of the red giant phase, and a low-mass red dwarf.
Eclipsing systems of this type are rare, not more than  twenty known and published. And only two of them have characteristics similar to EPIC 216747137, with a particularly hot subdwarf (effective temperature around 40000 degrees Kelvin) which is close to, and likely beyond, the central helium exhaustion.
The analysis of photometric, spectroscopic and astrometric data obtained with the Kepler and Gaia space telescopes plus 4 ground-based telescopes, produced very accurate measurements of the two stars of the system, highlighting a particularly high mass for the hot subdwarf, which can hardly be obtained with current evolutionary models of these stars and can therefore be of considerable help in validating and improving such current models.

The real light curve of EPIC 216747137, as measured by the Kepler space
telescope. Differently from the movie above, we note an increase of light
with maximum intensity at the secondary eclipse, due to the reflection and
re-emission of light from the heated hemisphere of the red dwarf, wich is
stronlgly irradiated by the hot subdwarf. See the MNRAS paper for more details.