A census of our neighbourhood

A census of our neighbourhood

An international team has conducted a census of all known objects within 10 parsec (30 light-years) of the Sun, resulting in a new catalogue of 540 stars, brown dwarfs, white dwarfs and exoplanets in 339 systems.

The compilation is based on data from the literature and includes the high-precision photometry and astrometry provided by the recent Gaia Early Data Release 3 for about two-thirds of the stars.
It is a complete 10pc census of known objects, including bright stars, companions in multiple star systems, brown dwarfs, and exoplanets. Other parameters, such as spectral types and radial velocities, are given, as well as a list of references to facilitate future studies. This sample represents a cardinal point for many other areas in stellar and galactic research. At the lowest level any models or proposed processes must be able to describe the local population.

The catalogue highlights the richness and variety of the solar neighbourhood with stars of very different types, masses, sizes, temperatures, and ages. The objects are mostly stars, the vast majority of which (61%) are red dwarfs, the most common type of star in the Milky Way, but also a surprising number of brown dwarfs and exoplanets. This updated census reveals a frequency of multiple systems of 28%.

Thanks to their proximity and the possibility of precise observations, nearby stars constitute a unique laboratory for our understanding of stellar physics and the galaxy.
This list reflects as much as possible the current state of our knowledge of the solar neighbourhood. It provides reference stars that can be used to define calibration samples for future detailed observations with current and future state-of-the-art instruments. It has great potential for use by amateur astronomers and the general public.
The study also explores how this list will evolve in future years in the context of large space and ground-based telescopes. Between reality and science fiction, the nearest exoplanetary systems to the Sun will be the highest-profile targets to scrutinise for biomarkers in their atmospheres with future instruments, and may one day be the first targets of human interstellar travel. 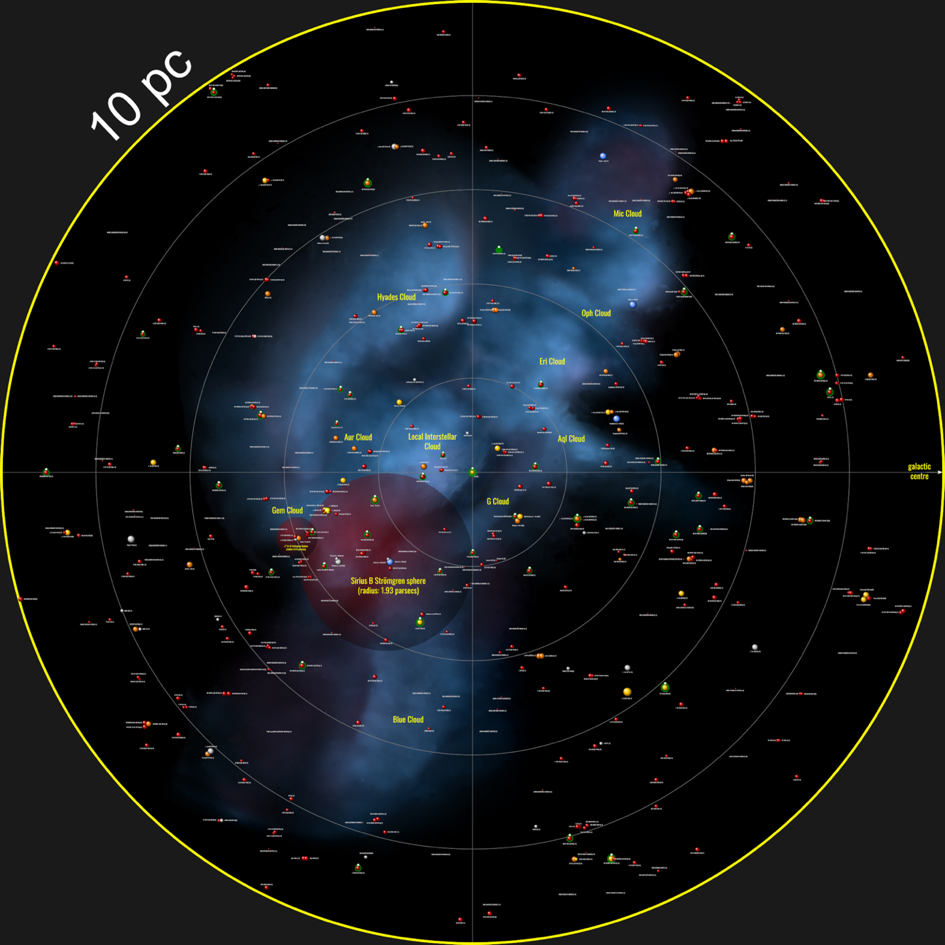 Projected view from above the galactic plane. The concentric circles are shown every two pc. The green circles around the stars indicate the number of confirmed planets. A higher resolution map is available at https://gruze.org/galaxymap/10pc/.
Credit: galaxymap.org, Twitter: @galaxy_map