The story of an exoplanet etched in its atmosphere

The story of an exoplanet etched in its atmosphere

The protagonist of this story is a gas giant planet, poetically named HD209458b. Unlike the gas giants of the Solar System, Jupiter and Saturn, it is a planet that orbits its star at a distance of just over 7 million kilometres, or one twentieth of the distance between the Earth and the Sun. With its period of three and a half days and an extremely high equilibrium temperature, HD209458b is a particularly interesting object to study because it exhibits extreme physical conditions not found in our system. Moreover, to the great fortune of astronomers, HD209458b is a transiting planet: every three and a half days it comes between us and its star, causing a partial occultation. During transits, the star’s light is filtered by the planet’s atmosphere, which leaves the characteristic ‘footprints’ of the molecules it contains. These fingerprints appear as a dense forest of thousands of absorption lines that can be resolved using high-resolution spectrographs. The spectra thus obtained enabled our team to identify six molecular species simultaneously for the first time: water, carbon monoxide, hydrogen cyanide, methane, ammonia and acetylene. Never before has the chemical composition of an extrasolar planet’s atmosphere been studied in such detail.

Although the atmosphere contributes almost insignificantly to the planet’s mass, it contains traces of its history of formation and evolution. These traces, like pieces of a jigsaw puzzle, must be fitted together so that an overall picture can be obtained. According to current theoretical models describing exoplanetary atmospheres, the discovery of so many molecules in the atmosphere of HD209458b, many of them containing carbon, would indicate an atmospheric chemistry richer in carbon than in oxygen. Physical models describing the protoplanetary disk, the planet’s formation site, show a higher abundance of carbon in the gaseous state beyond the water condensation line, which captures some of the oxygen available in solid form, i.e. several astronomical units from the parent star (one astronomical unit is equivalent to the Sun-Earth distance). It is therefore likely that HD209458b formed beyond this line of condensation. Compared to the Solar System, HD209458b would therefore have formed beyond the orbit of Mars, more likely between the orbits of Jupiter and Saturn, and then migrated towards its star at the distance we observe it today, about one tenth of the distance of Mercury from the Sun.

The approach to data analysis that led to this discovery is also an important step towards studying the atmospheres of rocky planets. When next-generation telescopes, such as extremely large telescopes, become available, it will be possible to search the atmosphere of Earth-like exoplanets for real biomarkers, such as molecular oxygen, that could indicate the presence of life on them.

The study “Five carbon- and nitrogen-bearing species in a hot giant planet’s atmosphere” (view-only paper version) has been published online on April 7, 2021 in Nature led by Paolo Giacobbe and including Aldo S. Bonomo, Alessandro Sozzetti, Gloria Guilluy and Mario Damasso. 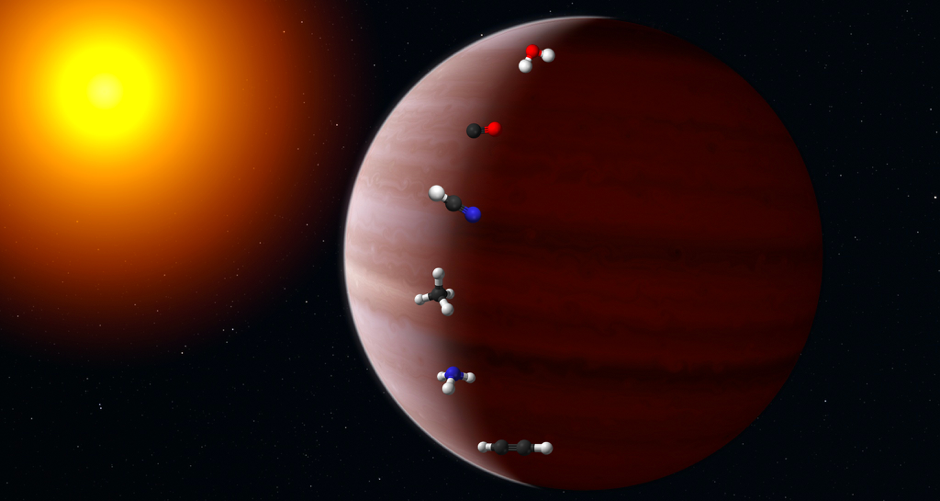