The team of the Astrophysical Observatory of Turin composed by Marco Giammaria (PhD student of the Turin University), Alessandro Spagna, Mario G. Lattanzi and Paola Re Fiorentin, in collaboration with Giuseppe Murante of the Astronomical Observatory of Trieste and Milena Valentini, post-doc at the Universitäts-Sternwarte of Munchen (Germany), recently published the results of an in-depth analysis of a cosmological simulation called AqC4 that reproduced a disk-galaxy very similar to the Milky Way.
By means of an innovative approach that compares the catalog of the simulated particles to a real stellar survey, it was possible to apply statistical techniques like those usually adopted for studies conducted for the Milky Way. By combining the latest data of the Star Formation Rate in the Solar Neighborhood obtained by Gaia with the results of our high-resolution cosmological simulation, it was possible to investigate the origin and evolution of the stellar disk of a galaxy very similar to the Milky Way and reveal some fossil signatures in the space-kinematic distribution of coeval stellar populations perturbed by events that occurred throughout the dynamic evolution of the galaxy.
The study confirmed the origin of the thick disk of our simulated galaxy, formed by a merger of a massive satellite of about 10^9 solar masses with the main disk-like galaxy occurred at redshift z ~ 1.6 (about 8,5 billion years ago), much like the process experienced by the Milky Way and the satellite Gaia-Sausage-Enceladus (see Helmi 2020). In addition, two other more recent events were studied (between 5.5 and 3.5 billion years ago) which indicate that the significant increase in the space-kinematic distribution of coeval stellar populations observed by other authors (Mor et al. 2019) in the Solar Neighborhood may have been caused by late merger events with smaller satellites.
These findings highlight that detailed studies of coeval stellar populations kinematics, which are made available by current and future Gaia data releases and in synergy with simulations, are fundamental to unravel the formation and evolution of the Milky Way disc. 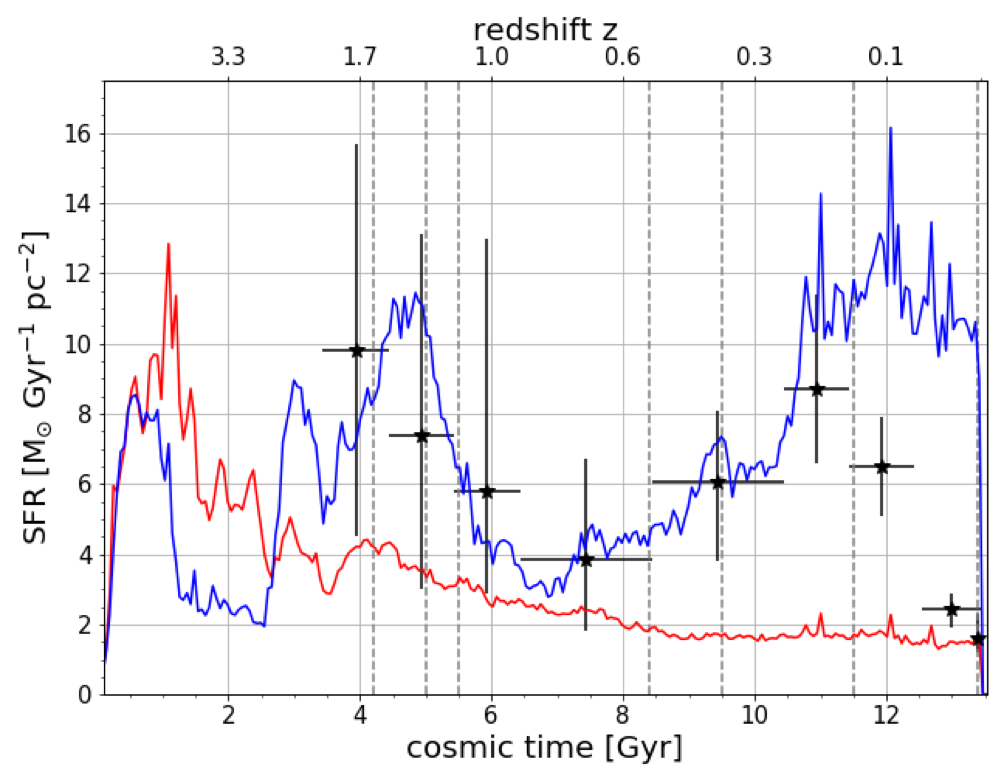 Figure 2 – The Star Formation Rate as a function of cosmic time for r ≤ 24.0 kpc (red line) and in the Simulated Solar Ring (blue line). The black star symbols refer to the data of Mor et al. (2019). The vertical dashed lines indicate the redshift/cosmic time of the accreted satellites.

By massimo|2021-03-17T16:08:00+01:00March 11th, 2021|NEWS, NEWS SCIENTIFICHE|Comments Off on The origin of the Galactic disk told by the Star Formation History and cosmological simulations
Page load link
Go to Top