Gaia’s observation of relativistic deflection of light close to Jupiter

Gaia’s observation of relativistic deflection of light close to Jupiter

The first experiment of the deflection of light in the Solar System was conducted by Eddington in 1919 and verified Einstein’s theory of General Relativity using observations of a star close to the Sun. 103 years after that experiment the Gaia space satellite, thanks to its high-precision astrometric observations, has revisited relativistic light deflection in the optical this time around Jupiter.

In a study led by Ummi Abbas, researcher at the Turin Astrophysical Observatory, Gaia’s observations of a star in close proximity (barely ∼7 arcseconds) to Jupiter’s limb were analyzed, measuring a deflection signal of nearly 10 milli-arcseconds (mas). This is the strongest deflection signal ever obtained around a planet in our Solar System at any wavelength.

The paper investigates, for the first time in the optical, the relativistic deflection of light by a planet in our Solar System, in this case Jupiter based on techniques of differential astrometry. The sphericity of an object produces a monopole deflection effect in the light of a star observed close to it, where as its oblateness produces an additional quadrupole deflection effect. The deflection depends on the angular separation between the deflecting body and the source. In the field surrounding Jupiter it is seen that the dominant deflection effect is that due to its monopole reaching 16.2 mas at its limb and falling off as the inverse of the distance between the star source and the planet’s center (impact parameter). The quadrupole deflection effect is barely 240 micro-arcseconds (µas) at the limb decreasing as the inverse cube of the impact parameter.

In the paper the authors focussed on the closest bright star with G = 12.78 mag observed on 25, almost consecutive, transits over a short time interval of roughly 3 days surrounding the observation at closest approach that took place at 03h 54m 56.450sec (italian time) on February 23rd, 2017. After a careful treatment of the data and a sophisticated analysis exploiting the surrounding reference stars they measured a total deflection signal of ∼10mas in good agreement with that predicted by General Relativity.

These results strongly encourage further investigations towards searching for and disentangling the quadrupole deflection from the total signal using Gaia astrometric observations from future processing cycles, where the ultimate goal will be to attempt a measure of the ∼100µas signal at closest approach to Jupiter’s limb due to the planet’s quadrupole moment that is almost 100 times smaller than the monopole deflection signal. 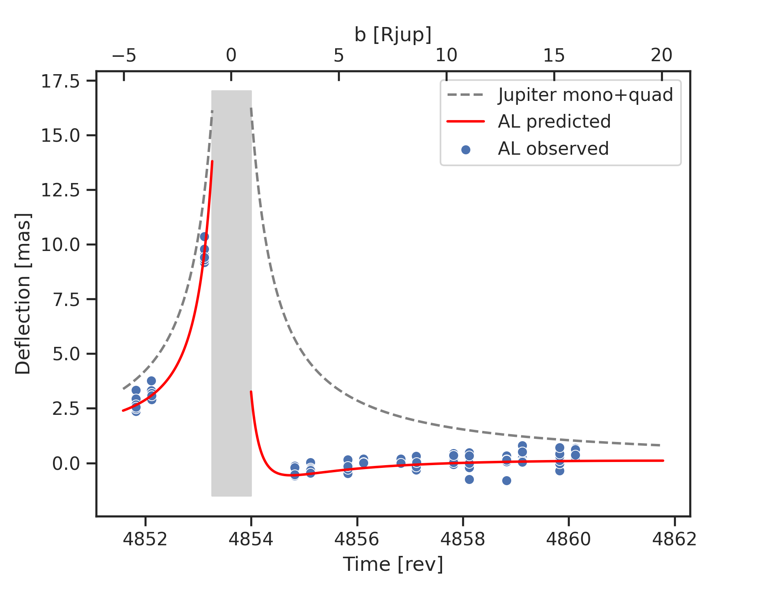 The relativistic deflection effect of the target star at various angular distances from the center of Jupiter. The blue circles represent the estimates obtained for each set of observational data corresponding to successive scans of the field of view around Jupiter by the Gaia satellite. The gray shaded area shows the exclusion zone of Jupiter. The gray dotted line represents the total deflection due to Jupiter’s monopole and quadrupole as predicted by General Relativity, while the solid red line shows the corresponding deflection, due to both Jupiter and the Sun, projected in the direction in which Gaia makes the measurement. The tick marks at the top show the distance to the planet in units of the radius of Jupiter. (Image credit: Abbas et al. 2022)