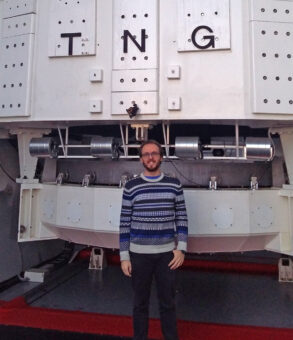 The K dwarf star BD-11 4672, already known to host a 4-year period exoplanet with a minimum mass of 0.65 Jupiter masses, has been found to host a second planet, having a minimum mass of 15 Earth masses and an orbital period of 74 days, featuring one of the highest eccentricities found for Neptune-mass exoplanets at similar periodsThe new planet BD-11 4672 c has been detected by an international team of researchers, led by Domenico Barbato and Matteo Pinamonti (INAF Torino), within the GAPS (Global Architecture of Planetary Systems) consortium using high-precision measurements collected with the HARPS-N spectrograph at Telescopio Nazionale Galileo.The search for exoplanetary systems with similar architectures, hosting both long-period giants and lower-mass planets on inner orbits, is key to our understanding of the planetary formation and evolution models; different formation and migration mechanisms cause the presence of long-period giant planets to either promote or impede the survival of inner lower-mass planets.The newly discovered planet is also located near the inner edge of the system’s habitable zone, and the dynamical stability analysis run by the team show that its mass and high eccentricity severely impact the survival of possible yet-undetected additional temperate planets, allowing only for the survival of super-Earths or Neptune-mass planets in the outer portion of the habitable zone.